In an international scale there is much discussion about, and deep interest in, finding the ideal diet, which will improve the health of human beings warding off illnesses. Ever since antiquity, the traditional diet of Cretans seems to be just such a one, including all the right ingredients.
The Greek island of Crete has always been identified with healing and regeneration. And once again, an ancient culture may offer lessons to the people of today!
Following scientific research and statistical analyses, the Cretan nutrition and diet has been proven to promote health and longevity. It consists almost exclusively of products that the people of Crete produce naturally. Products that only the island of Crete and its ideal climatic conditions can offer. 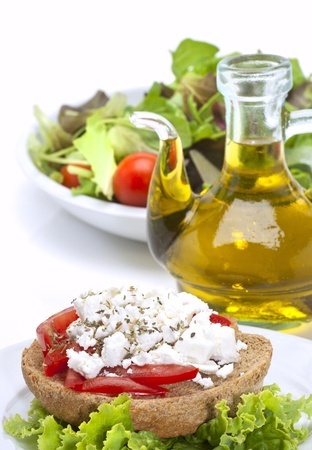 It is not only the unique in taste and quality Cretan products but also their combination, which gives an enormous nutritional value and can be found in every Cretan dish.
A comparative study among several developed countries, which began in 1960 on behalf of seven countries, has a group of about 700 Cretan men from the countryside under medical observation, regularly checking the state of their health: so far this group has had the lowest percentage of deaths caused by heart attacks and different kinds of cancer.
This study has also shown the Cretan population to be the longest living one: when, in 1991, thirty one years after the beginning of the study, the Social Health Sector of the University of Crete undertook the medical checkup of the group, about 50% were found to be still alive as opposed to the rest of the six participating countries where there wasn't a single survivor (even in the rest of Greece)!Until recently the diet was simple and wholesome: olive oil, which counted for the 1/3 of the individual's daily need in energy, but mainly cereals, principally bread, pulses, vegetables and fruit and, to a lesser degree, cheese, milk, eggs, fish and a little red wine with every meal. Taking into account the conditions of today's life, we would recommend a return to the traditional Cretan eating habits.

If someone decides to incorporate a Cretan-like diet, it is good to know the following basics: • Use olive oil as the principal fat, replacing other fats and oils.
• Drink a moderate consumption of wine, normally with meals; about one to two glasses per day for men and one glass per day for women.
• Eat fresh fruit as a typical daily dessert; limit sweets with a significant amount of sugar and saturated fat.
• Incorporate an abundance of food from plant sources, including fruits and vegetables, breads and grains, beans, nuts, and seeds.
• Eat minimally processed and seasonally fresh and locally grown foods.
• Total dietary fat should range from less than 25 percent to over 35 percent of energy, with saturated fat no more than 7 to 8 percent of total calories.
• Eat low to moderate amounts of cheese and yoghurt daily.
• Consume low to moderate amounts of fish and poultry weekly; and limit eggs from zero to four servings per week.
• Only eat red meat a few times or just one time per month.